The plot involved the KKK, the Jewish Defense League, black militants … and a bombing

Martin Luther King, Jr. addresses a crowd from the steps of the Lincoln Memorial where he delivered his famous, “I Have a Dream,” speech during the Aug. 28, 1963, march on Washington, D.C. U.S. Marine Corps photo

The Cold War often brings to mind visions of cloak-and-dagger spy escapades in Eastern Europe and Moscow — or the countless coups, revolutions, proxy wars and clandestine ops that pitted Communist and Western interests against one another in developing nations around the world.

Amid these sensational tropes of international espionage, it’s easy to forget the KGB and other intelligence agencies were highly active within the United States. Their exploits here weren’t quite as extravagant, but they went far beyond mundane intelligence gathering.

There were, of course, Soviet operatives in the United States who did focus strictly on intelligence. In the 1980s, a German-American spy hacked hundreds of networked military computers and sold the information to Russia, and KGB field stations established a massive surveillance program that monitored U.S. radar and satellite transmissions.

The Kremlin also ordered its agents in America to generate social unrest, undermine faith in the government and develop plans to sabotage targets in the military, energy and infrastructure sectors.

One such campaign sought to capitalize on the assassination of Dr. Martin Luther King, Jr. — by using it as a pretext for inciting a full-blown race war.

Propaganda materials attributed to the Ku Klux Klan, black militant organizations and the Jewish Defense League aimed to aggravate ongoing tensions between those groups and compel them to engage in open hostilities against each other.

From there, in theory, the violence would spread and engulf the general public. The campaign ultimately span three decades and culminated with Operation PANDORA, a plan to bomb a historically black college in New York and blame it on the JDL.

In 1992 Vasili Mitrokhin, a former KGB archivist with the First Chief Directorate, the unit responsible for foreign intelligence gathering and operations, defected from Russia to England. He brought with him a massive trove of top-secret KGB documents, eventually sharing over 25,000 files with Britain’s MI6 intelligence agency.

The files became the basis for two books, 1999’s The Sword and 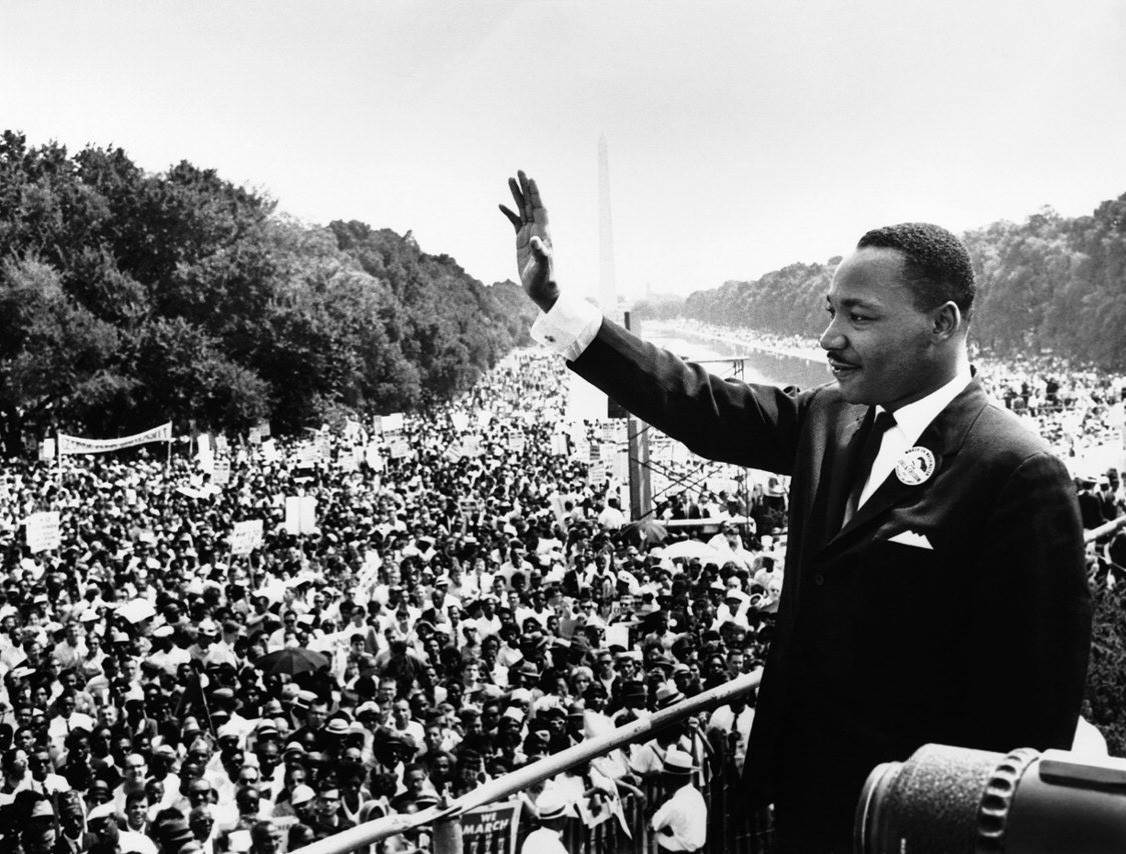 the Shield and The World Was Going Our Way: The KGB and the Battle for the Third World in 2005. Mitrokhin co-authored both volumes with British historian Christopher Andrew.

The Ku Klux Klan in San Francisco in 1964. Photo via Wikipedia

The books discuss Soviet intelligence gathering activities in the United States and elsewhere, as well as the plans to attack or sabotage dams, oil pipelines, power plants and other targets on American soil. They also provide details on the KGB efforts to inflame racial tensions in hopes of provoking a race war within the United States.

The race war Moscow envisioned would, effectively, kill two birds with one stone. While the KKK was eventually a factor in the scheme, black militants and the Zionist JDL were the main emphasis. The Kremlin wanted black militants to become the dominant force in African American political discourse and social movements, and hoped to use them to take out the JDL in the process.

From the Soviet perspective, King’s call for peaceful protests and nonviolent direct action had prevented a more volatile civil rights movement from emerging. If someone such as Stokeley Carmichael or a group like the Black Panther Party took control of the movement, a civil war could erupt on the streets of America.

Forced to focus on internal conflict, the United States would at least temporarily take its eye off of its foreign interests and lose political and strategic footing on the global stage.

Carmichael was the preferred candidate, according to Mitrokhin’s source material. Despite his early work with the Student Non-Violent Coordinating Committee, Carmichael had ultimately made his name by popularizing the term “Black Power.”

In 1967, he went on a global speaking tour, giving speeches in Moscow, Havana and Hanoi, in which he condemned racism and capitalism alike. In the speeches he hinted at an impending race war in the United States, referring, most likely, to the arming of the Black Panthers.

“We are preparing groups of urban guerrillas for our defense in the cities,’’ Carmichael said in Havana, according to The New York Times. “It is going to be a fight to the death.’’

Carmichael still harbored nonviolent inclinations, but he was more open to the prospect of violent resistance than King was, and his rhetoric often overlapped with that of his militant contemporaries. That, along with his popularity and influence, was good enough for Moscow.

Even if Carmichael fell short of Moscow’s more ambitious hopes and a civil war did not commence, replacing King with someone like Carmichael would still give communism a broader audience within the African American community, and potentially America at large. Carmichael and black militants were more openly sympathetic to communism than King, though the latter was not without his critiques of capitalism.

The KGB decided to hedge its bets anyway, or they just got greedy. Either way, it wasn’t enough for them to try to turn the black community against the white community. The Russians wanted to bring the Jewish community into the fray as well, particularly Zionist extremist groups such as Meir Kahane’s Jewish Defense League.

If they couldn’t get black militants to take control of the Civil Rights Movement and start a race war, perhaps they could at least get them to take out the JDL.

The Soviet Union’s propaganda department had been running an anti-Zionist and anti-Israel campaign since the early 1960s, at the latest. This was in part based on an official policy that cast Zionism as a racist and imperialist policy, but was more likely due to Soviet interests in the Persian Gulf and broader Middle East.

Moscow wanted access to Persian Gulf oil just as badly as Western countries did. The Soviet Union made inroads with some Arab nations, but it never achieved enough power in the region to gain control of the oil supplies. The Soviets increasingly laid blame for their problems in the Middle East on Israel and its ties to the West, thus making Israel and groups who support it targets.

With the goal of taking out the JDL and buttressing black militancy at the same time, the KGB began a disinformation campaign in the United States to target the JDL and undermine the U.S. government on the “Negro issue,” as Mitrokhin’s documents revealed.

In 1967 Moscow authorized Yuri Modin, the deputy director of the KGB’s Service A, to implement a strategy of portraying King as an “Uncle Tom” who was working with the the administration of Pres. Lyndon Johnson to secretly pacify the civil rights movement and prevent a violent uprising from the African-American population.

Modin, who had previously directed the Cambridge Five spy ring in England, would start the operation by using his contacts within the black press to plant articles that were critical of King. Initially, the KGB hoped to take advantage of images of the 1965 Watts riots to stir up feelings of rage. The sense was that if they could spark a certain degree of violence, King would be “swept aside by black radicals” such as Carmichael.

To organize, through the use of KGB residency resources in the U.S., the publication and distribution of brochures, pamphlets, and appeals denouncing the policy of the Johnson administration on the Negro question and exposing the brutal terrorist methods being used by the government to suppress the Negro rights movement.

To arrange, via available agent resources, for leading figures in the legal profession to make public statements discrediting the policy of the Johnson administration on the Negro question.

To forge and distribute through illegal channels a document showing that the John Birch Society, in conjunction with the Minutemen organization, is developing a plan for the physical elimination of leading figures in the Negro movement in the U.S.

The assassination of King in April 1968 abruptly altered the KGB’s plans. Instead of portraying King as traitor to his people and an accomplice in their oppression, it suddenly became preferable to cast him as a martyr to the cause, someone betrayed by the evil capitalist system that he sought to compromise and negotiate with.

The riots that erupted in more than 100 U.S. cities after King’s death suggested that racial tensions had perhaps reached a flash point, opening an opportunity for Moscow. The KGB revised its propaganda, but the goal remained the same.

Despite the violence after King’s assassination, and the KGB’s attempts to expand on it, the race war didn’t really come to fruition. Moscow, however, was still not ready to abandon the plan.

Around the same time, Modin’s operatives began mailing forged letters to several dozen black militant groups with fabricated stories of “atrocities” committed against African Americans by the members of the JDL. The letters called for “vengeance against Kahane and his chief lieutenants.”

The Soviets’ international campaign against Zionism and Israel was not lost on Kahane and the JDL, not was the fact that the KGB had been specifically targeting their organization. While Moscow was failing to incite the race war it dreamed of, it appears that the KGB’s activities did illicit a response from the JDL.

Though the JDL denied it, at least two bombings of Russian targets in the United States were attributed to the organization. On Nov. 25, 1970, a bomb went off in the New York City office of the Russian airline Aeroflot. On Jan. 8, 1971, another bomb struck a Soviet cultural center in Washington, D.C.

In both instances, according to Mitrokhin, the bombings were followed by telephone calls in which the caller claimed responsibility in the name of the JDL and used the phrase “never again,” one of the organization’s slogans.

Perhaps drawing inspiration from the bombings attributed to the JDL, the KGB drew up plans to carry out a bombing of its own. In July 1971, Anatoli Tikhonovich Kireyev, another Soviet agent, was instructed to implement Operation PANDORA, a plan to detonate a bomb at an undetermined historically black college or university in the in a black community in New York City.

After the bomb went off, calls would be made to “two or three black organizations” claiming responsibility for the attack in the name of the Jewish Defense League.

That bombing never occurred, and neither did Moscow’s American race war. Mitrokhin and Andrew’s books show the KGB had an elaborate and advanced network of spies and operatives within the United States for several decades, but the bureau seem to have misread something about American race relations.

Despite their ongoing failures, the KGB continued the campaign to stir up a race war for several years. In one final — and feeble — attempt, the KGB sent letters attributed to the KKK to the Olympic committees of several African and Asian countries prior to the 1984 Olympics in Los Angeles. The letters were full of racial slurs and threats, and declared that Olympics held in the United States were “FOR THE WHITES ONLY!”

The letters do not appear to have had any effect on that year’s Olympics.

View all posts by Darien Cavanaugh →

Fidel Castro Had a Bizarre Obsession With Milk